‘The Catcher in the Rye’ a Controversial Novel – Read the Review

The Catcher in the Rye

Holden Caulfield , a teenager from New York City, describes events that took place in December 1949 from a mental asylum one year later.

Holden begins his story at Pencey Preparatory Academy, an exclusive private school in Agerstown, Pennsylvania , on the Saturday afternoon of the traditional football game with a rival school. Holden has been expelled from Pencey due to poor work and isn’t to return after Christmas break, which begins the following Wednesday.

He plans to return home on that day so that he will not be present when his parents receive notice of his expulsion. On invitation, he goes to the home of his history teacher, Mr. Spencer. Spencer is a well-meaning but long-winded middle-aged man. Spencer greets him warmly and offers him advice, but embarrasses Holden by further criticizing Holden’s work in his subject.

Holden returns to his dorm wearing the new red hunting cap he bought in New York. His dorm neighbor Ackley is one of the few students also missing the game. Ackley, unpopular among his peers, disturbs Holden with his impolite questioning and mannerisms. Holden, who feels sorry for Ackley, tolerates his presence.

Later, Holden Caulfield agrees to write an assignment for his roommate, Stradlater, who is leaving for a date. However, Holden is distressed to learn that Stradlater’s date is an old friend, Jane Gallagher, on whom Holden had had a crush. When Stradlater returns hours later, he fails to appreciate the deeply personal composition Holden wrote for him about the baseball glove of Holden’s late brother Allie, and refuses to reveal whether he slept with Jane. Enraged, Holden punches him, and Stradlater easily wins the ensuing fight. Fed up with Pencey Prep, Holden catches a train to New York City, where he intends to stay in a hotel until he returns home on Wednesday.

In a cab, Holden inquires with the driver about whether the ducks in the Central Parklagoon migrate during winter, a subject he brings up often, but the man barely responds. Holden checks into the dilapidated Edmont Hotel. He spends an evening dancing with three tourist women in the hotel lounge and enjoys dancing with one, though is disappointed that he is unable to hold a conversation with them. 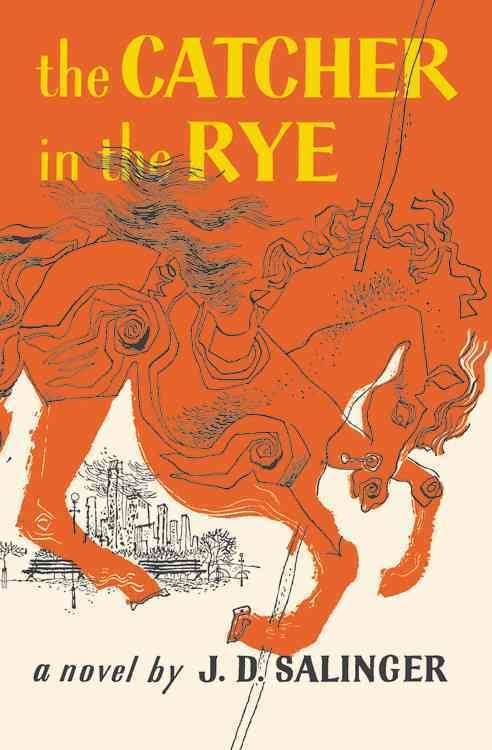 Following an unpromising visit to Ernie’s Nightclub in Greenwich Village, Holden agrees to have a prostitute named Sunny visit his room. His attitude toward the girl changes the minute she enters the room; she seems about the same age as he. Holden becomes uncomfortable with the situation, and when he tells her all he wants to do is talk, she becomes annoyed and leaves. Even though he still paid her the right amount for her time, she returns with her pimp Maurice and demands more money. Holden insults Maurice, who punches him in the stomach and leaves with Sunny.

The next morning, Holden, becoming increasingly depressed and in need of personal connection, calls Sally Hayes, a familiar date, and they agree to meet that afternoon to attend a play. Holden shops for a special record, “Little Shirley Beans”, for his 10-year-old sister Phoebe.

He spots a small boy singing “If a body catch a body coming through the rye “, which lifts his mood. After the play, Holden and Sally go ice skating at Rockefeller Center. Holden impulsively invites Sally to run away with him that night to live in the wilderness, but she is uninterested in his hastily-generated plan and declines. The conversation turns sour, and the two part ways.

Holden gets drunk at a bar, first calling an icy Sally, then walking to Central Park to investigate the ducks, breaking Phoebe’s record on the way. Nostalgically recalling the unchanging dioramas in the Museum of Natural History that he enjoyed visiting as a child, Holden heads home to see Phoebe, exhausted and out of money.

He sneaks into his parents’ apartment while they are out, and wakes up Phoebe – the only person with whom he seems to be able to communicate his true feelings. Holden shares a selfless fantasy he has been thinking about (based on a mishearing of Robert Burns’s Comin’ Through the Rye): he pictures himself as the sole guardian of thousands of children playing in a huge rye field on the edge of a cliff.

When his parents come home, Holden slips out and visits his former and much-admired English teacher, Mr. Antolini, who offers advice on life along with a place to sleep for the night. Holden is upset when he wakes up in the night to find Mr. Antolini patting his head in a way that he regards as “flitty” (homosexual). Confused and uncertain, he leaves as dawn is breaking and spends most of Monday morning wandering the city.

Losing hope of finding belonging or companionship in the city, Holden impulsively decides that he will head out West and live as a recluse. When he explains this plan to Phoebe on Monday at lunchtime, she wants to go with him, even though she was looking forward to acting in a play that Friday.

Holden refuses to let her come with him, which upsets Phoebe, so Holden decides not to leave after all. He tries to cheer her up by taking her to the Central Park Zoo, and as he watches her ride the zoo’s carousel, he is filled with happiness and joy at the sight of Phoebe riding in the rain.

In a short epilogue, Holden briefly alludes to “getting sick” and living in an institution in California near his brother D.B., and mentions he will be attending another school in September. Holden says that he doesn’t want to tell anything more because, surprisingly, he has found himself missing his former classmates. He warns the reader that telling others about their own experiences will lead them to miss the people who shared them.

Holden’s story begins on the Saturday following the end of classes at the Pencey prep school in Agerstown, Pennsylvania. Pencey is Holden’s fourth school; he has already failed out of three others. At Pencey, he has failed four out of five of his classes and has received notice that he is being expelled, but he is not scheduled to return home to Manhattan until Wednesday. He visits his elderly history teacher, Spencer, to say goodbye, but when Spencer tries to reprimand him for his poor academic performance, Holden becomes annoyed.

Back in the dormitory, Holden is further irritated by his unhygienic neighbor, Ackley, and by his own roommate, Stradlater. Stradlater spends the evening on a date with Jane Gallagher, a girl whom Holden used to date and whom he still admires. During the course of the evening, Holden grows increasingly nervous about Stradlater’s taking Jane out, and when Stradlater returns, Holden questions him insistently about whether he tried to have sex with her. Stradlater teases Holden, who flies into a rage and attacks Stradlater. Stradlater pins Holden down and bloodies his nose. Holden decides that he’s had enough of Pencey and will go to Manhattan three days early, stay in a hotel, and not tell his parents that he is back.

On the train to New York, Holden meets the mother of one of his fellow Pencey students. Though he thinks this student is a complete “bastard,” he tells the woman made-up stories about how shy her son is and how well respected he is at school. When he arrives at Penn Station, he goes into a phone booth and considers calling several people, but for various reasons he decides against it. He gets in a cab and asks the cab driver where the ducks in Central Park go when the lagoon freezes, but his question annoys the driver. Holden has the cab driver take him to the Edmont Hotel, where he checks himself in.

From his room at the Edmont, Holden can see into the rooms of some of the guests in the opposite wing. He observes a man putting on silk stockings, high heels, a bra, a corset, and an evening gown. He also sees a man and a woman in another room taking turns spitting mouthfuls of their drinks into each other’s faces and laughing hysterically. He interprets the couple’s behavior as a form of sexual play and is both upset and aroused by it. After smoking a couple of cigarettes, he calls Faith Cavendish, a woman he has never met but whose number he got from an acquaintance at Princeton. Holden thinks he remembers hearing that she used to be a stripper, and he believes he can persuade her to have sex with him. He calls her, and though she is at first annoyed to be called at such a late hour by a complete stranger, she eventually suggests that they meet the next day. Holden doesn’t want to wait that long and winds up hanging up without arranging a meeting.

Holden goes downstairs to the Lavender Room and sits at a table, but the waiter realizes he’s a minor and refuses to serve him. He flirts with three women in their thirties, who seem like they’re from out of town and are mostly interested in catching a glimpse of a celebrity. Nevertheless, Holden dances with them and feels that he is “half in love” with the blonde one after seeing how well she dances. After making some wisecracks about his age, they leave, letting him pay their entire tab.